Human trafficking prevention and awareness: what you need to know

With the goal of eradicating violence in all forms, CHI focuses on specific types of violence for purposes of education and awareness throughout the year. An ongoing focus and commitment for CHI is human trafficking.

Human trafficking is a form of modern-day slavery involving the illegal exchange of people for purposes of exploitation or commercial profit. Traffickers use force, fraud or coercion to trap victims into labor or sexual exploitation. While other forms of trafficking exist, labor and sex trafficking are the most prevalent, generating billions of illicit dollars per year for traffickers.

Human trafficking occurs worldwide, including in the United States and in virtually every community. States with major highway systems tend to have more reported cases, but no community is immune. An estimated 40.3 million people are in slavery worldwide. Numbers in the U.S. are difficult to determine, but statistics from the National Human Trafficking Hotline show the numbers are rising.

Anyone can be a victim, but traffickers prey on vulnerable populations. This includes people with psychological, emotional, economic or social vulnerabilities, as well as those who are victims of natural disasters and political unrest. Victims can be lured with promises of employment, education, stability, or even with the deceptive promise of a loving relationship. Traffickers may also forgo luring in favor of kidnapping.

It occurs anytime and all the time, and very likely in plain sight. Some events present prime opportunities for traffickers, including major sporting events and conferences. However, this crime occurs everywhere, day and night.

Because victims are threatened, beaten and brutalized, they may be too afraid, intimidated or confused to seek help. Additionally, things like immigration issues and criminal records complicate a person’s decisions regarding self-identification, often due to fear associated with ramifications. There are remedies within the law that provide protections, but many trafficked individuals are unaware of their options.

Health care providers are in a unique position to identify victims and help them with care and services. Here are some resources:

First passed in 2000, the Trafficking Victims Protection Act was reauthorized as part of the Violence Against Women Act in March of 2013 in the 113th Congress. The legislation addresses the issue of human trafficking through the “three P’s”–the internationally recognized framework to combat human trafficking:

In 2009, then Secretary of State Hillary Rodham Clinton announced the addition of a fourth P–Partnerships, which is now recognized as a fundamental piece of the overall paradigm.

Both Congress and administrative agencies continue to address the problem of human trafficking through laws and rules that mitigate, assist victims, and seek to prevent this crime. 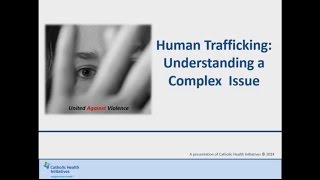 An introduction to human trafficking for the health care community